Many people learn with flashcards. Mostly in school and then perhaps for a higher education. But why are they doing it? What makes this method better than just plain reading a book on the topic?

What is it about?

This intuitively makes sense. The more often we hear about a restaurant or a scientific principle the better we can remember it. This intuitive process of rereading certain articles before an exam is a good start. Another would be to regularly take a look at new words to learn for your dream language. But of course there are better and more scientific methods and programs to go about it. Before we take a look at an example program, firstly we shall look at the history and the science behind spaced repetition.

The basics were laid by Hermann Ebbinghaus in 1885 who discovered the forgetting curve. He did this in an array of self-experiments. In these he created nonsense one-syllable words that were not part of the language before like KOJ. The forgetting curve (see image) shows how much of an originally learned block of information remains. This only works of course if there is no repetition of the information. 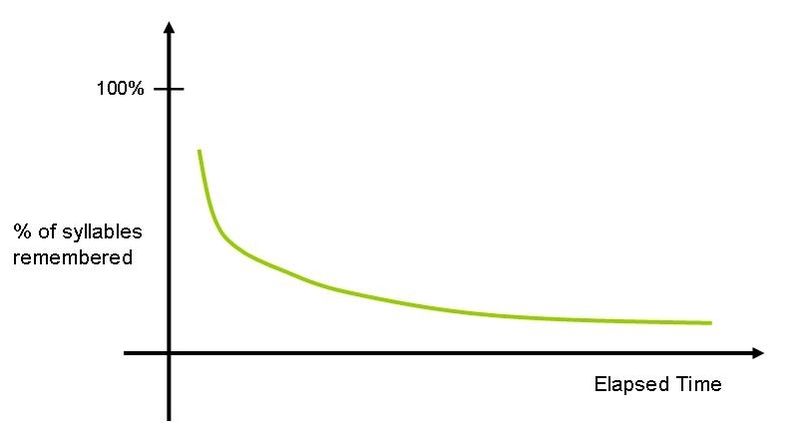 The red curve shows that the most information is lost in the beginning. This is usually estimated as 30 minutes to 24 hours. Ebbinghaus proclaimed that this curve could be changed with a better representation and active recall of the information. Upon that he proposed that the forgetting curve could be reset with repetition-based learning (green curves in the image on the side). Additionally, he worked on the learning curve which is a topic for another day.

The idea of spaced repetition was proposed by C. A. Mace in 1932 (Psychology of Study) and field tested by H. F. Spitzer in 1939. After a time of silence on the topic it was picked up again by cognitive psychologists in the 1960s such as Arthur Melton.

The science behind it

The main concept behind spaced repetition is dramatically called the spacing effect. However, there are a few theories how this effect that has been scientifically proven, actually works. The latter two are particularly used for the concept of context-based learning.  Basically, stating that the social and theme-based context you study in is important. The following theories concentrate on the perspective of spaced repetition:

This theory regards semantic priming as the main cause. This basically means a word that is imprinted in memory for its certain sound or as the shape it is viewed. For example remembering new vocabulary with an additional picture.

This only explains how the first few repetitions work. In tests where the font of the text was later changed revealed no significant effect of spaced repetition. This shows that the priming is of importance as long as the object is not changed.

Encoding variability. This means the same information that is presented in different contexts leads to a better encoding. Basically stating that different settings of information get the brain going better. For example seeing a person at different places or events should help you recognize them easier in the future. This seems to make sense for most situations in life but for studying in abstract settings it seems off. The theory was tested by Bird, Nicholson and Ringer in 1978. In their scientific study, testing tasks were coupled with a fixed setting. When those were later changed there was no measurable effect. This only leads to the thought that it doesn’t work on spaced repetition.

Study-phase retrieval theory. According to this theory the learner retrieves the first presentation at later presentations. So the memory of the first studying effort is remembered and this additional effort seems to help with memorizing. Additionally the method of mass representation (learning everything in one big session and repeating it often during the session) leads to deficient processing of learned information . From this we learn that the time in between helps with memory recall.

How can I use this knowledge?

The main takeaway from this is to space out the flashcards by larger time periods. For this you can use a physical box of flashcards and repeat them in intervals of roughly 2-3 times the interval of the last study. However, this process can get confusing easily with many cards and many different starting dates. Thus, it is recommended to use an automated program that does the calculation for the right dates on its own. One such program used by many students is called Anki.

Anki is an open-source program developed in 2006 by Damien Elmes. It is based on the algorithm of SuperMemo. It being open-source leads to all kinds of fun add-ons made by the community (Anki Forum). Starting from the main decks page you can create new decks and change them around to create sub-decks (which work like normal folders). You can also add new cards to your decks or browse your collection and change your existing cards. Under stats you can view various statistics on your learning behavior. Additionally, you can download existing decks from (https://ankiweb.net/shared/decks/) or import decks that your friends made. This allows you to directly jump into the topic without having to craft each card yourself. In the program there is a fixed retention rate installed that decides how often you see each card. You can of course lower that rate to see cards more often.

What can I take away from this

Spaced repetition is a powerful principle that allows you to learn effectively. There is no more time wasted on massed repetition. A system based on spaced repetition gives your brain the optimal time to just remember the last time without it getting annoying. Using Anki as a system allows you to give up the micromanagement. The tool is arranging the cards automatically.

Try out spaced repetition for yourself and let us know on Discord what you’ve learned!

Resources
Spaced repetition on Wikipedia: Explanation of the origin; with further information on implementation and a list of other programs.
Spacing effect on Wikipedia: Explanation of the Effect and it’s scientific causes; with further information on practical use cases.
The right time to learn: mechanisms and optimization of spaced learning; Smolen, Paul; Zhang, Yili; Byrne, John H. published in: Nat Rev Neurosci. 2016 Feb; 17(2): 77–88. Digital version:  With an in-depth explanation of the neuroscience involved.

Book of the Month