Ignore the pressure and fear of boss monsters and missed dailies, come to the casual side!

Many members of KOA use Hard Mode to help push themselves in life and keep everything minimalist, but some people also don’t like how slow and pressured Hard Mode can be. Enter Zen Mode. Using Zen Mode, you can live life through Habitica using it as a daily check-list without fear as a motivator, or fear motivation.

Checklists galore! Checklists are a player’s best friend. They reduce damage from uncompleted dailies, allow users to see everything they need to do, and keep everything organized.

Hard to long, trivial to short. Task difficulty is a great reward system, and allows the user to setup their tasks how they want. Below, this mechanic will be described in more depth.

Keep it balanced. The goal of Zen Mode is to remove fear motivation, but that can lead to people cheating themselves out of the rewards. Make sure you keep everything balanced so checking items off the list feels rewarding, but without taking away your motivation to keep going. 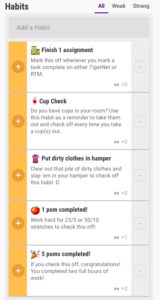 One great use of Habits is as a sort of reward system. Maybe these are things you do a lot of, or you want to do occasionally but don’t want them to be a priority. Set all Habits to trivial or easy, depending on the workload, and keep the list relatively short. Below, you can see an example list of Habits: (clothes in hamper, completed poms, etc.).

Habitica shines as a daily checklist. For dailies, start by picking out three or four things you already do each day and adding it to the list. Then, pick one thing that you want to work on. Once you have all of those dailies figured out over time, perhaps after a week, check in with yourself and find out how you can condense them into a checklist on one daily.

For example, one might have a daily called “Working on Wellness”. Inside the daily, it has a checklist of 4 different things that were previously all their own dailies. Once the user got into the habit of performing them, they can condense them into one daily. Once they have one checked off, they can give themselves the ability to check off the daily as a whole.

Another reason to have a daily with checklists is for saving health. For example, one might have a daily titled “three meals a day” with checklist boxes for each meal. Once they have eaten a meal, they can check it off their list and even if they don’t eat all three meals, the daily won’t give all of the damage. 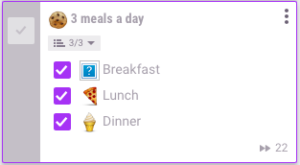 Tasks should be major projects or accomplishments, such as completing a personal project, finishing a book, or a large final project for school. Anything you deem major can be a task, and set it to hard difficulty. Once you have completed a task, you will get tons of gold and XP for your efforts with this system.

Want to use Zen Mode?

Go ahead and start using the steps laid out above! Keep an eye for the Zen Mode Challenge in the KOA Habitica guild as well to help you get started. Want to take a vow? Feel free to shoot the following message in #habitica on the KOA Discord!

I vow to live my life to the fullest through casual gamification, accomplishing my goals and being rewarded, not damaged by them.