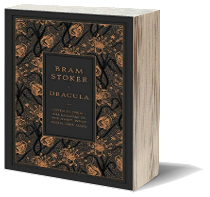 If you’re looking for a harrowing horror story or just love stories about vampires, read Dracula!

A masterpiece of the horror genre, Dracula also probes identity, sanity and the dark corners of Victorian sexuality and desire. It begins when Jonathan Harker visits Transylvania to help Count
Dracula purchase a London house, and makes horrifying discoveries in his client’s castle. Soon afterwards, disturbing incidents unfold in England – an unmanned ship is wrecked; strange puncture marks appear on a young woman’s neck; a lunatic asylum inmate raves about the imminent arrival of his ‘Master’ – and a determined group of adversaries prepare to battle the Count.

About the Author & Context

Bram Stoker was born in Ireland in 1847 and studied mathematics at Dublin’s Trinity College, graduating with honors in 1870. Aside from his longtime role as an assistant to the famed actor Sir Henry Irving, he began carving out a second career as a writer, publishing his first novel, The Primrose Path, in 1875. Stoker published Dracula, his most famous work, in 1897 — though he died before the fictional vampire would achieve widespread popularity though numerous film and literary adaptations in the 20th century. Including Dracula, Stoker wrote a total of 12 novels in his lifetime.

In the original preface of his iconic novel, Stoker wrote this passage:

Bram Stoker did not intend for Dracula to serve as fiction, but as a warning of a very real evil. However, London at the time was still recovering from a spate of horrible murders in Whitechapel, and — with the killer still on the loose — releasing such a story would cause mass panic, which is why Stoker’s editor returned the manuscript with a single word of his own: No.

In the 1980s, the original Dracula manuscript was discovered in a barn in rural northwestern Pennsylvania, and it is now owned by Microsoft cofounder Paul Allen. The manuscript begins on page 102.  Jonathan Harker’s journey on a train, once thought to be the beginning of the story, was actually in the thick of it. This raises a question: what was on the first 101 pages? What was considered too real, too frightening, for publication? We may never know…

The following are the main takeaways we’ve extracted from the Book of the Month. Click on the theme to read more.